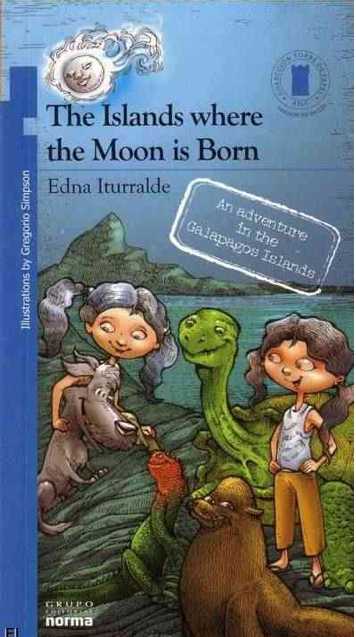 Two sisters travel by dark of night with their parents, escaping an unnamed terror. The family has abandoned its auto in favor of a wooden cart, about which their mother says, «Fugitives can’t be choosers.»

Danger, in the form of roving soldiers, catches up with the fictional family before the first chapter of their story ends. To survive, the parents and their girls must part company. So opens Edna Iturralde’s fascinating children’s novel, The Islands Where the Moon Is Born: An Adventure in the Galapagos Islands.

Before long, little Caro and Mary are escaping an Euadorian orphanage run by a witch of a director who won’t allow them to keep their dog, the humorously named Find Find. Then magically, all three-girls and dog-transform into seabirds and are flying to the Galapagos Islands to help save animals who are as endangered as they are.

A rare species of author

Similar to the Galapagos wildlife she writes about,  Ecuadorian children’s author Edna Iturralde is a rare species. In a country where books are such luxury items that a typical publication run of a new title is 2,000 copies, Iturralde’s books for children have sold more than 200,000 copies. A number of her books are required reading in schools in South America, Mexico, and Spain. As one  reviewer for Amazon.com wrote, Iturralde sells better in Ecuador than J.K. Rowling of Harry Potter fame.

Iturralde has won a number of prestigious honors for her work including a 2002 Skipping Stones Magazine award for her popular title Verde fue mi Selva (My Forest Was Green) and the selection of El Misterio de las Bolitas de colores (The Mystery of the Colored Marbles) for the 2006 IBBY Honor List of the International Board on Books for Young People.

But while an author may be extremely popular in her native language, it is difficult to break the translation barrier. Although a number of Itturalde’s books can be found through sellers such as Amazon, all are in Spanish.

So far, The Islands Where the Moon Is Born is her only title that has been translated into English. It is a puzzle that Iturralde’s sole English title is not available for sale in English-speaking countries. So far, it appears that Ecuador’s Libri Mundi is the only bookseller carrying either the Spanish or English versions of this book.

Chance led me to The Islands Where the Moon is Born. I met the author during the 2009 Highlights Foundation Writers Workshop at Chautauqua. We discovered an unexpected connection: Iturralde had spent her early childhood only a few miles from where I had grown up. She was well acquainted with Children’s Fairyland in Oakland, California, a predecessor of Disneyland and one of our mutual and dearest childhood stomping grounds.

Perhaps Fairyland helped develop Iturralde’s wild sense of whimsy. It still is the kind of place that fosters a love of fairytales, nursery rhymes, and imagination.

Concern for the underdog

Iturralde is known for her meticulous research, detail, vivid imagination, and concern for the underdog-particularly for children who live in the midst of political conflict. The Islands Where the Moon Is Born is a nod both to Ecuador’s role in protecting Colombian refugees and preserving the endangered wildlife of its province, the Galapagos Islands.

Catholic Relief Services (CRS) says that «only a small percentage of Colombians fleeing the violence of their country are recognized as refugees and granted legal status and protection.»

CRS reports, «Mounting violence in Colombia has forced more people to seek refuge in Ecuador in recent years. Since 2000, an estimated 40,000 Colombians have sought asylum….Even in Ecuador, a country known for having an open and humane policy concerning refugees, only about 13,000 have been granted refugee status.»

A Godfather who barks

When writing for young children and touching on such real-world dangers, it is necessary to develop concern in the reader without inspiring fear. So although The Islands touches on some life-and-death issues, it does a fine job of balancing drama with humor and fascinating bits of natural history.

On the light-hearted side, for example, is a don’t-mess-with-me kind of sea lion called Don Vitroly. He is referred to as the «Godfather» and is the leader of a congress of the islands’ endangered species. Much the same as Mario Puzo’s «Godfather,» Don Vitroly requires homage.

When a group of penguins ignore him and march up to Mary and Caro instead,  Don Vitroly barks at them until they turn «in the right direction.»

Caro is surprised to see penguins on «these warm islands,» but she and Mary are discovering many oddities about the wildlife of the Galapagos including sea iguanas that swim. (For some background about the islands’ wildlife see the BBC video at the end of this story.)

Caro recounts a subsequent conversation with Bravebeauty, a seagull who is a diplomat and an attache to the «queen» of the islands: «‘Penguins are a little blind on land, poor things,’ whispered Bravebeauty. ‘That’s why they often get lost while looking for their own nests. But they’ve learned to make a special sound while bowing their heads, as if politely begging pardon, to avoid getting in trouble when they choose the wrong one…. Each penguin took turns saluting Don Vitroly, calling him Godfather and touching his right flipper respectfully. They stretched out their own flippers in the air as far as they could. At first, I thought this was a salute, part of the ceremony, but Bravebeauty explained it was something the penguins did to cool themselves on land by letting the breeze draw the extra heat from their bodies.»

Iturralde also delves into the human history of the islands. Bravebeauty tells the girls that the first visitors to the islands, mostly Spanish-speaking pirates, discovered giant tortoises whose shells reminded them of saddles, which are called «galapagos» in Spanish.

Eventually, the girls meet a group of giant tortoises, who have escaped from the witch who is trying to destroy the islands’ wildlife (in fact, the same witch who ran their orphanage). This magical explanation of impending ecological disaster is, of course, more exciting than a non-fiction discourse on the problems of human encroachment on the Galapagos Islands.

The plight of Lonesome George

Mary and Caro learn that the largest and oldest tortoise of the group, known as Lonesome George, is «the only animal on the islands without a mate.» Lonesome  lives «alone in a refuge for animals.»

The tenderhearted girls feel like crying about this problem and wonder, «How was it possible that something like this could happen?»It is easy to see how teachers could use Iturralde’s novel to introduce an ecology unit on endangered species.

In real life, scientists have been trying for more than 15 years to help George find a mate. They have not been able to locate another tortoise who is from George’s family of Geochelone abigdoni.

It appears, however, that Lonesome may have finally succeeded in mating with two different tortoises that are similar to his species. If successful, the eggs from one mate should hatch sometime near the end of October 2009.

One can only hope that George will succeed in fatherhood. You can learn more about him in the video below.  One can also hope that Iturralde will succeed in translation. She has written a lovely fantasy that deserves a larger audience; she deserves homage.